The report Ocean for Climate: Ocean-Related Measures in Climate Strategies was presented in Paris on 16 October at a conference hosted by the Embassy of Chile: Ocean & Climate Nexus: Road to COP25.

Another presentation took place on 23rd October at the Our Ocean conference in Oslo, Norway, at a side event organized by the Embassy of Chile in Norway.

The Chilean Government will host and chair COP25, the 25th Conference of the Parties to the UN Framework Convention on Climate Change (UNFCCC), in Santiago, Chile 2nd-13th December, 2019.

Co-organized by the Embassy of Chile in France, the Ocean & Climate Platform, the Tara Ocean Foundation, the University of Chile/CMM, with support from the Because the Ocean initiative, the French Facility for the Global Environment (FFEM), and the French Ministry for the Ecological and Inclusive Transition, the Paris conference was opened by H.E. Juan Salazar, Ambassador of Chile in France and H.E. Brigitte Collet, French Ambassador for Climate Change. It was made up of two sessions: Ocean Sciences and Climate Change, Gaps and Challenges (with scientific experts from France and Chile), and Road to COP25, Building the Blue COP Heritage (with the Chair of the UNFCCC Subsidiary Body for Scientific and Technological Advice (SBSTA) Paul Watkinson, Sweden’s Ambassador for the Ocean H.E. Helen Agren, OECD’s Deputy Director for Environment Anthony Cox, the Prince Albert II of Monaco Foundation’s Senior Advisor Raphaël Cuvelier, and Janique Etienne of FFEM. The debates were facilitated by Rémi Parmentier, Coordinator of the Because the Ocean initiative Secretariat, Loreley Picourt, Head of the Ocean & Climate Platform, and André Abreu of the Tara Ocean Foundation. 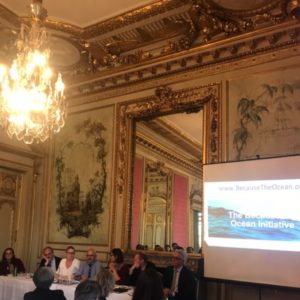 In his opening remarks Ambassador Juan Salazar outlined the importance of ocean governance and ocean conservation for Chile, a country with a coastal line of over 4000 km. and one of the largest Exclusive Economic Zones in the world, of which 42% enjoy some degree of protection.

“Chile’s incoming COP25 presidency conceived this COP to bear the colors of the ocean, hence the name Blue COP”, Ambassador Salazar said. “Chile has encouraged Parties to discuss together how to integrate ocean issues into the UNFCCC process, and to develop further technical work based on scientific evidence”.

“Chile wants the ocean community to be united and work collectively with the aim to find solutions for the ocean. This effort has been named Platform of Ocean Solutions, with the idea to launch [it] in Santiago [at COP25]. The Platform seeks to be a point of connection between solution developers and policy-makers and to cover all the initiatives, tools, and methodologies that can be used by governments to develop climate policies for the ocean. We aim with this tool to enhance the ambition from Parties and to promote the protection of the ocean from the effects of climate change. […] This will be presented as the next step of the Because the Ocean Declarations and all other ocean initiatives”.

At the side event in Oslo on 23rd October, Chile’s Ambassador to Norway Waldemar Coutts outlined the role of the Because the Ocean initiative helping, since COP21, governments and the environmental commununity at large to abandon the “silos mentality” whereby practitioners working on climate and ocean respectively have tended to work in isolation from each other, at least until recently. Ambassador Coutts emphasized that it is to continue to “break the silos” that the COP25 Presidency has conceived COP25 as a Blue COP.