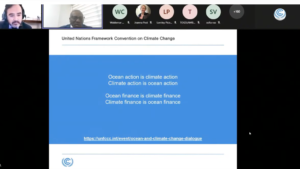 30 June 2021 – The annual meetings of the subsidiary bodies of the UN Convention on Climate Change (UNFCCC), held online this month, ended with an informal meeting on Climate & Ocean held yesterday and co-hosted by the Chilean COP25 and UK COP26 Presidencies, to reflect on next steps to advance ocean-climate action pursuant to the report of the COP25-mandated Ocean & Climate Dialogue released by the UNFCCC Secretariat earlier this year. Under the heading Ocean Action is Climate Action/Climate Action is Ocean Action – Ocean Finance is Climate Finance/Climate Finance is Ocean Finance, the meeting was facilitated by Marco Martinez, Ministry of Foreign Affairs of Chile, and wrapped up by Archie Young, UK’s Chief negotiator for COP26.

Some 165 delegates and non-party observers attended the 90 minute informal meeting which provided opportunities for several delegations – including Fiji, Mexico, Indonesia, Singapore, Norway, Brazil, Australia, the Republic of Korea, the Alliance of Small Island Developing States (AOSIS), the African Group, the EU, the USA and of course Chile and the UK —  to reiterate their commitment to addressing the interconnection of ocean and climate change within the framework of the UNFCCC and the Paris Agreement. Nature-based solutions such as habitat protection (including Marine Protected Areas and “blue carbon ecosystems”), fisheries conservation, management and adaptation, sea level rise, the greening of the shipping sector, and the development of ocean-based renewable “blue” energy, and ocean-climate finance were among the concerns most frequently raised by delegations. The Commonwealth Secretariat and the Arab Group also took part in the conversation.

Several participants also emphasized the need to work co-operatively within other UN bodies, such as the International Maritime Organization (IMO), the UN Food and Agriculture Organization (UN FAO), the UN Framework Convention on Biological Biodiversity (CBD), the Commission on the Conservation of Antarctic Marine Living Resources (CCAMLR) or the on-going UN negotiations on a legally-binding instrument on the conservation and sustainable use of marine biodiversity beyond national jurisdiction (BBNJ). The Secretariat of the Because the Ocean initiative has contributed to a policy brief published in the month of May by the Ocean & Climate Platform: Swimming the Talk: How to strengthen Synergies between the Climate and Biodiversity Conventions.

Parties have also expressed interest in further strengthening the ocean-climate nexus under the existing UNFCCC processes, including the Nairobi Work Programme, the Science agenda item and the Marrakech Partnership. Among the options on the table in the run-up to COP26, countries have outlined the possibility of having a recurring ocean-climate dialogue, the inclusion of the ocean in COP26 final Decision (1.CP26), or a joint political statement as part of the action agenda.

At the opening of the meeting, Ambassador Coutts from Chile reminded the meeting that Chile is preparing with other partners the third Because the Ocean Declaration which it hopes to launch before or at COP26.

COP26 is scheduled to take place in the first half of November 2021 in Glasgow. It follows the first “Blue COP”, COP25 held in Madrid under the Chilean COP Presidency in December 2019. Making COP26 a success is particularly important, because this is when a number of key unfinished business must be concluded (including climate finance), and it is also the time when the second round of Nationally Determined Contributions (NDCs) are due to be presented. The Ocean & Climate Platform has released a Provisional Analysis as of June 2021, of Coastal & Marine Ecosystems as Nature-Based Solutions in New or Updated NDCs, which incorporates inputs from the Secretariat of the Because the Ocean initiative.