18 September 2019 – The Because the Ocean initiative will shortly publish a report in response to the Intergovernmental Panel on Climate Change (IPCC) landmark report on the Ocean and the Cryosphere in a Changing Climate (SROCC) to be released in Monaco on 25 September.

The new report, “Action to Address the Ocean-Climate Nexus: Options for Ocean-Related Measures that can contribute to Nationally Determined Contributions, National Adaptation Plans, Adaptation Communications and national policy frameworks” will provide a suite of options for positive action which governments can take to increase the resilience of the ocean.

Stemming from a series of workshops organized by the Because the Ocean initiative – in Santiago Chile (October 2018), Madrid Spain (April 2019), and Suva Fiji (May 2019), and in the margins of UNFCCC COP23 (Bonn, 2017) and COP24 (Katovice, 2018) – the measures described in the report are offered for possible inclusion in Nationally Determined Contributions (NDCs) and other instruments under the Paris Agreement.

In accordance with the Paris Agreement, in 2020 Parties will submit updated and more ambitious NDCs with the aim of keeping global warming to 1.5ºC if at all possible, with an upper limit of 2ºC.

The report will be available online on the website of the Because the Ocean initiative at this URL: www.BecauseTheOcean.org, shortly after the SROCC is adopted and presented publically and following on from next week’s UN Secretary General’s Climate Summit in New York.

The report will contain a summary of some of the main findings of the SROCC, followed by pragmatic actions aimed at both mitigation and adaptation. These include enhancement of Blue Carbon in coastal areas, sustainable, ocean-based renewable “Blue” energy; marine and coastal adaptation measures, and hybrid action (contributing to both mitigation and adaptation) in the fisheries/aquaculture and shipping sectors.

Representatives from some 40 governments participated in the Because the Ocean workshops, together with nearly 60 experts and policy practitioners from international organizations, academia and NGOs. Many of them contributed to the review of the up-coming report prepared by the Secretariat of the Because the Ocean initiative, with support from the Prince Albert II of Monaco Foundation.

“After several years of discussion within the UNFCCC on how to incorporate the ocean in the work of the UNFCCC, we are glad to see the debate moving to what concrete actions and measures can benefit both the global climate and the global ocean,” said Raphaël Cuvelier, Projects Coordinator of the Prince Albert II of Monaco Foundation.

The next Conference of Parties to the UNFCCC (COP25) will take place in Santiago, Chile. Emphasizing the importance Chile pays to the ocean-climate nexus, COP25 President Carolina Schmidt, Environment Minister of Chile announced at the Because the Ocean workshop held in Madrid in April 2019 that she wants a “Blue COP,” meaning to advance progress in protecting the ocean against adverse climate change impacts, and taking into account the role of the ocean in climate change mitigation. 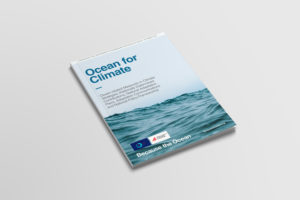