The Because the Ocean Initiative

The Because the Ocean Initiative was launched by 23 countries at COP21 in Paris in November 2015. These countries all signed the first Because the Ocean Declaration, which supported a then just proposed Special Report on the Ocean by the Intergovernmental Panel of experts on Climate Change (IPCC) and the convening of a high-level UN Ocean conference in support of the implementation of Sustainable Development Goal (SDG) 14, which focuses on the ocean, and promoted an Ocean Action Plan within the UN Framework Convention on Climate Change.
A year later, a second Because the Ocean Declaration was launched during COP22 in Marrakech. In the declaration, the 33 signatory countries “encourag[e] UNFCCC Parties to consider submitting Nationally Determined Contributions that promote, as appropriate, ambitious climate action in order to minimize the adverse effects of climate change in the ocean and to contribute to its protection and conservation.”
The Because the Ocean initiative is supported by its partners: the Ministry of External Relations of Chile, the Prince Albert II of Monaco Foundation, the Tara Foundation, the Pacific Community Secretariat, the Institute on Sustainable Development and International Relations (IDDRI) and Ocean Conservancy, among others.
In the last five years, the Because the Ocean Initiative has encouraged progress on the incorporation of the ocean in the climate change policy debate, with a special focus on the inclusion of ocean action into Nationally Determined Contributions (NDCs) under the Paris Agreement, and more widely into climate strategies. Workshops highlighting the ocean/climate connection and actions and measures that can be taken have been held in Washington DC (September 2016), Bonn (November 2018), Concepción, Chile (March 2018), Santiago Chile (October 2018). Two other regional workshops on “Ocean NDCs” took place in 2019, in Fiji and Madrid, Spain (April 2019) and in Suva, Fiji (May 2019). Based on these consultations, a guidance document, Ocean For Climate: Ocean-Related Measures in Climate Strategies has been published in October 2019 after the IPCC Special Report on the Ocean and Cryosphere in a Changing Climate (SROCC) was released. 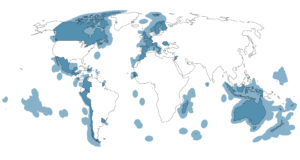 [Combined Exclusive Economic Zones: 26 627 535 square miles, or 20 106 976 square nautical miles – Equivalent to the landmass of the Americas, Europe and Russia together]

The first Because the Ocean declaration was launched in Paris at COP21 in 2015. It called for: 1.) A special report of the IPPC on ocean and climate change; 2.) Convening a UN Ocean Conference to promote the implementation of SDG14, the Ocean Sustainable Development Goal; and 3.) the adoption of an Ocean Action programme under the UN Framework Convention on climate Change. The first two items have been achieved; the second Because the Ocean Declaration elaborates on the third item.

Click here to read the first Because the Ocean Declaration

The Second Because the Ocean declaration was launched at COP22 in Marrakech in 2016. It underlines the importance of further scientific knowledge to better understand, (1) the biological interactions of marine biodiversity and ecosystems with greenhouse gas emissions and the climate system, particularly with respect to mitigation opportunities, and (2) the socio-economic and environmental implications of climate change impacts on the ocean, with a view toward adaptation action. It encourages UNFCCC Parties to consider submitting Nationally Determined Contributions that promote, as appropriate, ambitious climate action in order to minimize the adverse effects of climate change in the ocean and to contribute to its protection and conservation.

Click here to read the second Because the Ocean Declaration