Originally scheduled to take place in November 2020, the 26th Conference of the Parties to the UN Framework Convention on Climate Change (COP26) has now been postponed until 1-12 November 2021, in Glasgow.

During the Monaco Ocean Week which took place online this year, together with the Prince Albert II of Monaco Foundation (FPA2), the Because the Ocean initiative organized a meeting of the countries signatories of Because the Ocean declarations, in order to take stock and consider action at COP26. 52 participants from 16 different countries, plus representatives from the Association of Small Island Developing States (AOSIS) and the EU Commission took part. Click here to read a report on that meeting. 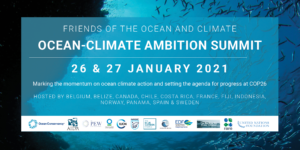 Click here to watch a selection of interventions or the full video stream. 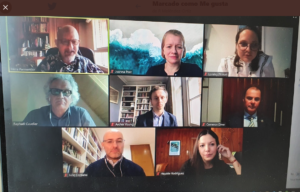 On 5 June 2020 the Because the Ocean Initiative organized, jointly with the Ocean & Climate Platform, a Deep Dive session of the Virtual Ocean Dialogues hosted by the World Economic Forum and the Friends of Ocean Action: The UNFCCC Ocean Dialogue: What is Needed? What to Expect?

The Virtual Ocean Dialogues was a week-long online event which took place 1-5 June, to coincide with the original dates of the second High Level UN Ocean Conference now postponed until 2021 in the light of the current Covid-19 crisis. When the recording of this Deep Dive session is available online, we shall share it on this page. Virtual events are the new normal for the moment and they can open up a world of possibilities for initiatives like us. Using companies such as Smart Works to help host these events can still keep us connected to our peers, and the audience during this time.

COP25: The BlueCOP in Madrid

The Because the Ocean Initiative was a very active participants at COP25, the BlueCOP that took place in December 2019 in Madrid under the Presidency of Chile.

It is virtually impossible to summarize the hundreds of events addressing the ocean-climate nexus which took place in the two weesk. Discussion on action arising from the Special Report of the IPCC on the Ocean and Cryosphere in a Changing Climate (SROCC), the Because the Ocean initiative’s Ocean for Climate Report, the Ocean & Climate Platform’s Policy Recommendations, IDDRI’s Opportunities for increasing Ocean Action in Climate Strategies, and the release of IUCN’s Deoxygenation report, were among the first week’s highlights.

On 3rd December 2019, the Chilean Presidency organized a special event to announce its plan to launch a Platform of Ocean Solutions where Parties to the Paris Agreement and other stakeholders can share their commitments and plans to integrate ocean-related measures into their climate strategies. Prince Albert II of Monaco spoke at that meeting, together with COP25 President Carolina Schmidt, Chile’s Minister of Science André Couvé, Valérie Masson-Delmotte of the IPCC, and Because the Ocean Initiative Secretary Rémi Parmentier, followed by Emily Pidgeon of Conservation International and Jessie Turner of the International Alliance to Combat Ocean Acidification. Later that evening, the Because the Ocean Initiative organized in partnership with the Ministry of Culture of Spain, the Thyssen-Bornemisza Museum, and the TBA21 Foundation, a reception at the Thyssen-Bornemisza Museum to celebrate the release of the Ocean for Climate report and the display of Irish artist John Gerrard’s Western Flag masterpiece. Prince Albert II of Monaco, together with Spain’s Minister of Culture José Guirao, Spain’s Minister for the Ecological Transition Teresa Ribera, Chile’s Minister of Science André Couvé, and Francesca Thyssen, Founder and President of the TBA21 Foundation spoke at this event attended by some 250 representatives of the worlds of art, business, academia and COP25 delegates and observers.

The rest of COP25 saw various interventions from representatives of the Because the Ocean initiative, presenting and discussing the recommendations contained in the Ocean for Climate report. Our Secretary Rémi Parmentier facilitated the opening of COP25 Ocean Day at the Spanish Pavilion on the morning of 6 December, and spoke that afternoon at the high-level session of 13th Meeting of the Nairobi Partnership dedicated this year to action arising from the IPCC Special Report.

On 7 December, Rémi also facilitated the opening of the EU Ocean Day in the EU Pavilion, with participation of the newly appointed EU Commissioner for the Environment and Ocean Virginijus Sinkevicius and COP25 President Carolina Schmidt, among others.

Increasing ambition in the global fight against climate change was the main outcome sought at this, the last UNFCCC COP before Parties to the Paris Agreement present their plans for the second ambition period of the Agreement (the so-called Nationally Determined Contributions, or NDCs) over the course of 2020. However, when COP25 ended on Sunday 15 December, delegates and observers at COP25, including COP25 President Carolina Schmidt of Chile, expressed their strong dissatisfaction, concern and sadness for a COP outcome that failed to reflect the political resolve called for by the severity of the on-going climate emergency. Enhanced NDCs are critical given that the IPCC and UN Secretary General Antonio Guterres warn that the present trajectory of commitments would lead us much above the Paris Agreement target of limiting global warming to 1,5 identified by the IPCC.

Nevertheless there was a good news for us to celebrate. For the first time, the COP Decision recognizes the importance of the ocean, and launches a process to begin in 2020 aimed at strengthening the linkages between climate and ocean policies and strategies — the outcome the Because the Ocean Initiative had been seeking throughout the past year. Click here to read our final statement issued on 15 December during COP25 closing session.

The report Ocean for Climate: Ocean-Related Measures in Climate Strategies was presented in Paris on 16 October at a conference hosted by the Embassy of Chile: Ocean & Climate Nexus: Road to COP25.

Another presentation took place at the Our Ocean conference on 23rd October in Oslo, Norway, at a side event organized by the Embassy of Chile in Norway.

The Chilean Government will host and chair COP25, the 25th Conference of the Parties to the UN Framework Convention on Climate Change (UNFCCC), in Santiago, Chile 2nd-13th December, 2019.

Co-organized by the Embassy of Chile in France, the Ocean & Climate Platform, the Tara Ocean Foundation, the University of Chile/CMM, with support from the Because the Ocean initiative, the French Facility for the Global Environment (FFEM), and the French Ministry for the Ecological and Inclusive Transition, the Paris conference was opened by H.E. Juan Salazar, Ambassador of Chile in France and H.E. Brigitte Collet, French Ambassador for Climate Change. It was made up of two sessions: Ocean Sciences and Climate Change, Gaps and Challenges (with scientific experts from France and Chile), and Road to COP25, Building the Blue COP Heritage (with the Chair of the UNFCCC Subsidiary Body for Scientific and Technological Advice (SBSTA) Paul Watkinson, Sweden’s Ambassador for the Ocean H.E. Helen Agren, OECD’s Deputy Director for Environment Anthony Cox, the Prince Albert II of Monaco Foundation’s Senior Advisor Raphaël Cuvelier, and Janique Etienne of FFEM. The debates were facilitated by Rémi Parmentier, Coordinator of the Because the Ocean initiative Secretariat, Loreley Picourt, Head of the Ocean & Climate Platform, and André Abreu of the Tara Ocean Foundation.

In his opening remarks Ambassador Juan Salazar outlined the importance of ocean governance and ocean conservation for Chile, a country with coastal line of over 4000 km. and one of the largest Exclusive Economic Zones in the world, of which 42% enjoy some degree of protection.

“Chile’s incoming COP25 presidency conceived this COP to bear the colors of the ocean, hence the name Blue COP“, Ambassador Salazar said. “Chile has encouraged Parties to discuss together how to integrate ocean issues into the UNFCCC process, and to develop further technical work based on scientific evidence”.

“Chile wants the ocean community to be united and work collectively with the aim to find solutions for the ocean. This effort has been named Platform of Ocean Solutions, with the idea to launch [it] in Santiago [at COP25]. The Platform seeks to be a point of connection between solution developers and policy-makers and to cover all the initiatives, tools, and methodologies that can be used by governments to develop climate policies for the ocean. We aim with this tool to enhance the ambition from Parties and to promote the protection of the ocean from the effects of climate change. […] This will be presented as the next step of the Because the Ocean Declarations and all other ocean initiatives”.

At the side event in Oslo on 23rd October, Chile’s Ambassador to Norway Waldemar Coutts outlined the role of the Because the Ocean initiative helping, since COP21, governments and the environmental commununity at large to abandon the “silos mentality” whereby practitioners working on climate and ocean respectively have tended to work in isolation from each other, at least until recently. Ambassador Coutts emphasized that it is to continue to “break the silos” that the COP25 Presidency has conceived COP25 as a Blue COP. 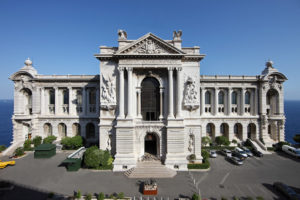 Launch of the Special Report of the IPCC on the Ocean and Cryosphere in a Changing Environment, Monaco, September 2019

In collaboration with the Prince Albert II of Monaco Foundation, the Because the Ocean initiative was present at the launch of the IPCC Special Report, to recommend measures for the incorporation of the ocean in UNFCCC mechanisms and instruments, including NDCs.

In collaboration with the Secretariat of the Pacific Community and the Ocean Pathway Partnership, the Because the Ocean initiative organized a third regional workshop on ocean NDCs with representatives from the South Pacific.

In collaboration with the Spanish Ministry the Ecologic Transition and the European Commission, the Because the Ocean initiative organized a second regional workshop in Madrid in April 2019. 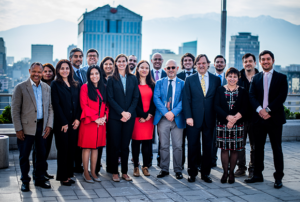 The fourth Because the Ocean workshop, held in Santiago, Chile in October 2018 was the first of a series of regional workshops to further advance discussions on the incorporation of the ocean into Nationally Determined Contributions. Representatives from Argentina, Chile, Colombia, Costa Rica, Dominican Republic, Guatemala, and Uruguay, as well as the UN FAO, the Prince Albert II of Monaco Foundation and the Ocean Conservancy took place in this workshop.

The second Because the Ocean workshop took place during COP23 in Bonn. The report contains three key messages to policy-makers. As Minister Inia Seruiratu, Fiji’s High-Level Climate Champion for COP23 said at the end of the workshop: “It should now be clearly recognised that the climate action needed to achieve the objectives of the Paris Agreement will never be enough if the ocean is not part of that action.”

Click here to read the workshop’s report and its key messages.

Washington DC September 2016 Is the Paris Agreement good news for the Ocean?

The first workshop of the Because the Ocean initiative, “Is the Paris Agreement good news for the Ocean?” was held in Washington DC in September 2016, co-sponsored by the Ministry of External Relations of Chile and the National Geographic Society.

Download the special edition of the Earth negotiations Bulletin on the workshop.